Enough of God to Go Around

Posted on November 27, 2012 by livingasapprentices

A dust-up at work the other day reminded me of something I learned from Stephen Covey years ago: the principles of scarcity and abundance.

I was raised in an atmosphere of scarcity.  To me, there was never enough time, enough love, enough affection, enough achievement, enough money, enough trust.  My mother taught me at an early age that there was also never enough  God.  Embittered by the death of her husband, an army chaplain, in World War II and left to care for a three-year old daughter on her own, she was careful to teach me never to be too happy because one day “the other shoe would drop.”  Or, never to pray “Thy will be done” because God will take you seriously and take away everything you want and love.

It was astonishing to me, therefore, to read in The Seven Habits of Highly Effective People that there were people in the world who were relatively free of fear, jealously, yearning and other emotions  that roil around when a family is mired in a culture of scarcity.  These people were raised in an atmosphere of abundance.  There was always enough love, trust, respect, hugs, time, and all the other important things that children need.

And then I learned that the culture of scarcity  also infected my view of God.  What a shock when I read the statement, “You can have as much of God as you want.”    How could that be? I couldn’t fathom not having to fight for or perform for someone’s attention and love. I soon learned that  I was not the only one who assumed that God couldn’t possibly notice me because of all the other more important people who demanded his attention. 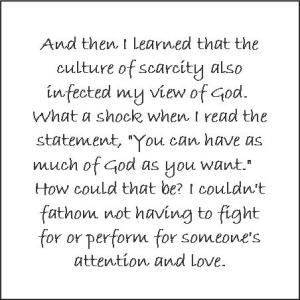 I had to re-learn the stories I had told myself about who God was. It was  difficult  to understand what Jesus even meant by the abundant life (let alone believe that it could be mine) for someone who had rarely felt an abundance of anything good . . . hardscrabble living dies hard!

I think attitudes of scarcity and abundance explain many problems in interpersonal relationships – even in the church.  The gospel of scarcity easily finds a home in the church.  We really don’t want new people to join us because there’s not enough of anything (the pastor’s time, pews in the back, money, parking spaces).  We can naysay all attempts to start new projects, develop new ministries or raise new monies.  It is too much of a stretch to believe that God will provide because we have always assumed there  will never be enough of anything.

On the other hand, people who see abundance are ready to charge forward.  They assume that what is needed will be provided.  They are eager to look at the old problems with fresh eyes because there is enough intelligence, enough dedication, enough determination to do whatever God is calling them to do.  They can trust in the present and the future because they learned to trust  in the past.

Sometimes negativity and fear and unwillingness to change can be alleviated if we just stop to think:   Is my attitude a doctrine of scarcity? If so, can I change my thinking?  Can I trust the fact that I was created in the image of God, and God never is in the business of scarcity?  God is all about abundance.  We need to move into that neighborhood with him.

As I reflected on the incident at work, I realized that it flared up because someone had an attitude of scarcity  so powerful that he couldn’t see that he didn’t have to fear that someone would take what he needed.  He, and we,  can trust that we can always have enough of God and God’s resources as we want and need.  There is always enough of God and God’s love to go around!

This entry was posted in Living as Apprentices and tagged scarcity and abundance, Seven Habits of Highly Effective People, Stephen Covey. Bookmark the permalink.

1 Response to Enough of God to Go Around