Posted on March 12, 2015 by livingasapprentices

“Weeping may linger for the night, but joy comes with the morning.  You have turned my mourning  into dancing; you have taken my off my sackcloth and clothed me with joy. Psalm 30;5 b; 11-12 (NRSV)

What exactly is a wounded healer?  Henri Nouwen brought an  awareness of that term to

Christian thought in his book of the same name. (Nouwen is speaking here about professional “ministers.”  I am enlarging that term to “Christ -followers.)  Nouwen says: “There is nothing that can written about ministry without a deeper understanding of the ways in which a minister [Christ-follower] make his [or her] wounds available as a source of healing.  . . . . A minister [Christ-follower] is called to recognize the sufferings . . . in his own heart and make that recognition the starting point of his service.  His service will not be received as authentic unless it comes from a heart wounded by the suffering about which he  speaks.”

Forgiveness was not part of my lifestyle as a child.  And, I am chagrined to admit, it has only been in the last third of my life that I have really begun to understand and practice the discipline of forgiveness.  My journey with forgiveness began when a wise counselor told me that I had to forgive my mother or my anger would destroy me.

I did not want to forgive my mother!  But I had learned that my wants and feelings had nothing to do with forgiving. One day I sat on my bed and berated God. “If you want me to forgive

her, you’ll have to do it.” Little did I understand how theologically correct my ultimatum was. I had to be willing, but God had to do the work. My process of becoming a wounded healer, instead of a wounded daughter, was beginning.

My relationship with my mother did not change. It was toxic; I needed to stay away. But gradually my anger dribbled away. Decades later, my mother struggled with several health issues. My sister was the only one of five siblings who lived near enough to help. After a few years of being totally responsible for mother’s care, she was physically and emotionally exhausted. God nudged me and I knew I was being called to go home and help. God worked out all the details of the move – a job transfer, a way to handle housing, the change of heart my husband had about moving. And so we moved.

I helped where I could and gradually as mother slid away into dementia I learned to leave the past behind and act in a loving way. And then one day I was with my mother in her living room as I had been hundreds of times before, half-listening to her complaints as I had hundreds of time before. She asked me a question, and I turned to look at her.  And suddenly I saw a lonely and fearful elderly woman, small, bent over, and suffering immense emotional pain – as she had for dozens of years. I felt forgiveness and love. What started in my bedroom twenty years earlier was completed in her living room.

The process of becoming a wounded healer is described in this beautiful passage from Jeremiah 33: 5-7  as interpreted by Eugene Peterson in The Message:

But now take another look. I’m going to give this city a thorough renovation, working a true healing inside and out. I’m going to show them life whole, life brimming with blessings. I’ll restore everything that was lost to Judah and Jerusalem. I’ll build everything back as good as new. I’ll scrub them clean from the dirt they’ve done against me. I’ll forgive everything they’ve done wrong, forgive  all their  rebellions. And Jerusalem will be a center of joy and praise and glory  for all the countries on earth. They’ll get reports on all the good I’m doing for her. They’ll be in awe of the blessings I am pouring on her.”

If we let him, God will renovate our hearts, worki 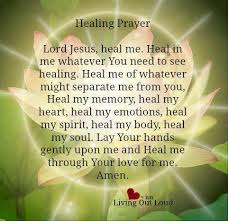 ng a true healing as we learn to forgive others. We will be blessed, restored, scrubbed clean, and forgiven for our wrongs and rebellions.  Our lives will be a center of joy and praise and glory for all around us. People will be in awe of what God is doing in us.  We will become a wounded healer.

MULLING IT OVER:  Do know a “wounded healer?”  What does that person bring to your life?  Do you know a wounded person who is still drowning in the hurt and pain?  What do they bring to your life? We all have wounds. Chances are you are a wounded healer  – or one of the hurt people who hurt people. Ask the Holy Spirit to help you see who you really are.

This entry was posted in Becoming a Wounded Healer and tagged forgiveness, Henri Nouwen, Jeremiah 33, wounded healer. Bookmark the permalink.