Posted on June 3, 2015 by livingasapprentices

One of the most moving stories about St. Francis of Assisi involves his revulsion for lepers. This revulsion is understandable since lepers were ostracized from society and most often 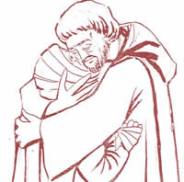 were dirty and smelly and disfigured. One day Francis came across a leper. Moved by a deep impulse of grace, he got down from his horse to embrace him. (Some sources say he even kissed him.) After this he said he felt a new gentleness in his body and spirit and was ready to really serve the Lord.

Jean Vanier, founder of the L’Arche movement which serves people with mental challenges, opines that during this experience Francis was converted; he had a change of attitude and inner change. “Francis began with fearing and despising of what appeared the most dirty, which in this period of time was the leper, to discovering the presence of God in the leper.  . . .  [this story helps us] begin to understand the whole mystery of people’s rejection of God.  We don’t want a god who is hidden in the dirt or hidden in dirty people or in smelly people or disfigured people or in those 40 million people who are in the refugee camps throughout the world.”

Vanier goes on to explain that we will continue to despise others until we have recognized, loved, and accepted what is despicable in ourselves. Which, perhaps, is why the commandment to love our neighbors as ourselves is  more complicated that it first seems. I am not capable of loving myself until I deal with my demons. Francis’ example would suggest that the only way to do that is to have a real encounter with our own lepers – and accept that Christ dwells and delights in them, too.

*image of francis from www.franciscansisters.org.uk

This entry was posted in Living as Apprentices and tagged Francis of Assisi, lepers, love your neighbor as yourself. Bookmark the permalink.
%d bloggers like this: