Posted on December 28, 2018 by livingasapprentices

This blog contains more than 800 posts.  This post was written in on December 30, 2012, at the end of my first year of blogging.  It’s still pertinent.

Long ago before I heard of the concept of “spiritual formation,” I discovered Stephen Covey who taught the need to be  effective not just efficient. He emphasized that to accomplish this would take paradigm shift, a willingness to change  perspective and see 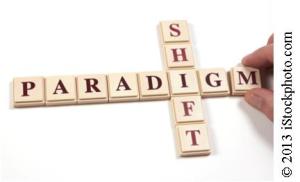 Covey’s way of thinking changed my life.  And so when I was introduced to M. Robert Mulholland’s definition of spiritual formation (“the process of being conformed to the image of Christ for the sake of others”) in An Invitation to a Journey,” I was immediately at home.  It was another “paradigm shift.”  And the “process of being conformed” became my life’s work – for myself as well as in my job.

The imminent arrival  of New Year’s Day  jump-started my realization that the more I think about “being conformed to the image of Christ,” the more it seems like peeling an onion.  I want to live the life that Jesus did. Therefore, I want to live without anger or fear or bitterness or judgment or the need to control.  So how do I do that?  It’s not as simple as making a New Year’s Resolution and whipping up my will power.  To me,  behavior change involves paradigm shifts and “first causes.”

If I want to change a behavior, it doesn’t work to stiffen my resolve, although I guess that’s a good first step – like taking the thin brown skin off the onion.  What I really have to do is

drill down to what causes the behavior that I’m trying to change.  For example, when I get upset or angry, I can usually peel off the layers and find my (mistaken) belief that life is supposed to be fair. So when it doesn’t seem fair, something is wrong and I have a right to be upset.

It takes a major paradigm shift to eliminate that (or any) mistaken approach to life, especially since it came from my mother. In the emotional setting of  turmoil, confusion, and grief,  my 3-year old child’s mind learned that it wasn’t fair that my father, a minister, volunteered to serve in World War II.  It wasn’t fair that my mother’s marriage was ended before it really began.  It wasn’t fair that her plan to be a minister’s wife was disrupted by friendly fire in a war zone.  It wasn’t fair that her self-described “happily- ever-after” view of life was blown away in Germany during the bombing of a railroad track near a group of U.S. soldiers walking to freedom.  And since the answer to the prayer “thy will be done” was “unfair,” it was probably correct to say that God isn’t fair either.

It took many decades of peeling off layers and layers of emotional baggage before I realized that my response to life was rooted in determining what was fair and what wasn’t. A major paradigm shift to “life probably won’t be fair – and that is difficult” was necessary if I was to learn to think, feel, and behave differently. I had to unearth the “first cause” before I could begin to make a change.

Another thing I learned from Stephen Covey is that in the physical world there is always a brief (infinitesimal) pause between an action and a reaction.  That pause in the world God created is a lesson to me. In Apprentice we call that pause a “space for grace.”   In 2013 my goal is to take more advantage of that “space for grace” – to peel the onion and learn “the first cause” of the reaction I am about to have.  Is it the Spirit of Jesus in me or a “blast from the past” that will determine how I respond?

Stephen Covey on paradigm shifts, in The Seven Habits of Highly Effective People:

“Our paradigms, correct or incorrect, are the sources of our attitudes and behaviors, and ultimately our relationships with others.  I remember a mini-paradigm shift I experienced one Sunday morning on a subway in New York.  People were sitting quietly – some reading newspapers, some lost in thought, some resting with their eyes closed.  It was a calm peaceful scene.

Then suddenly, a man and his children entered the subway car.  The children were so loud and rambunctious that instantly the whole climate changed.  The man sat down next to me and closed his eyes, apparently oblivious to the situation.  The children were yelling back and forth, throwing things, even grabbing people’s papers.  It was very disturbing.  And yet, the man sitting next to me did nothing.

It was difficult not to feel irritated.  I could not believe that he would be so insensitive as to let his children run wild like that and do nothing about it, taking no responsibility at all.  It was easy to see that everyone else on the subway felt irritated, too. So finally, with what I felt was unusual patience and restraint, I turned to him and said, “Sir, your children are really disturbing a lot of people.  I wonder if you couldn’t control them a little more?

The man lifted his gaze as if to come to a consciousness of the situation for the first time and said softly, ” Oh, you’re right. I guess I should do something about it.  We just came from the hospital where their mother died about an hour ago.  I don’t know what to think , and I guess they don’t know how to handle it either.”

Can you imagine what I felt at that moment?  My paradigm shifted.  Suddenly I saw things differently and because I saw differently, I thought differently, I felt differently and I behaved differently.  My irritation vanished. I didn’t have to worry about controlling my attitude or my behavior; my heart was filled with the man’s pain.  Feelings of sympathy and compassion flowed freely. ‘Your wife just died?  Oh, I’m  so sorry!  Can you tell me about it?  What can I do to help?’  Everything changed in an instant.”

This entry was posted in Living as Apprentices and tagged Invitation to a Journey, M. Robert Mulholland, Paradigm shift, Stephen R. Covey. Bookmark the permalink.
%d bloggers like this: