Posted on March 11, 2020 by livingasapprentices

We are in the season of Lent, a period of 40 days before Easter when Christians traditionally lament over their sins and then, in response, choose something to give up such as chocolate or Facebook or alcohol. The idea is to daily turn away from what distracts us or derails us and turn back to God.  Instead of giving up something for Lent, this year I encourage you to let go and let God. This material was first published in 2016; you can see how much worse the problem has gotten in 2020.

“Watch your mouth” was a clear statement that someone in our family said something out of line (except the parents, of course).  And the parents who said it meant it.  I distinctly remember the horrible taste of brown Lava soap as my mother “washed my mouth out” when I said a forbidden word as a young teenager.  I thought of that incident often during the years when I was a volunteer reading teacher in the county jail and walked the hallways or sat with an inmate and heard language I had never heard in my life – and, unfortunately, began to absorb by osmosis  into my vocabulary. 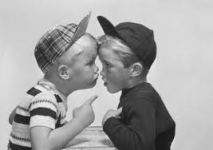 But I never thought I would see the day when candidates for the highest office in this land would throw around insults like school boys in a playground as they are arguing who is the best person for the job.  Talk about counter-intuitive!  But here we are in 2016 listening on TV and radio and hearing offensive language sliding off the tongue like butter from one candidate and rolling out less confidently from others who want to win the competition for biggest bully in the campaign.

I thought about this ugliness when I dipped into Calvin B. DeWitt’s book, Song of a Scientist, The Harmony of a God-soaked Creation again.

“. . . Human beings have a special honor of imaging God’s love to the world that bears with it a special responsibility. God is love and we should image God’s love.  Imaging the Creator’s love and care for the creatures sustains us as their appreciative beholders , prevents us from abusing them or their kind, compels us to have compassion for the biosphere. . . “

Of course, DeWitt’s subject matter is care for creation, but I think his words are just as applicable to how we are to care and communicate with each other. When we fall to the level of demeaning the way someone looks, talks, thinks, or believes, we are no longer communicating. We are bullying. Bullying in any form is dangerous as well as ineffective. It’s time for Americans to watch our mouths!

Watching your mouth involves other tasks than just editing offensive language. “Little white lies,” exaggeration, not speaking up when we should (as in when the whole group around us is gossiping) are all examples of lack of integrity of speech. In his book, The Good and Beautiful Life, James Bryan Smith recalls a time at a dinner party when he was asked about his opinion of Hawthorne, a writer Jim had never read.  He reports that the conversation lasted an awkward ten minutes, during which he responded with  “carefully crafted lies.” Why did I persist in the conversation?” he asks.  Why do any of us hide behind lies? His answer is that we all have “a deep need to think well of ourselves.  ‘I am important and my well-being is my main mission. There will be times when I need to lie in order to gain what I want or prevent something that I do not want.  That is why lying is okay.’  It is an ends-means justification.”

Every time I teach this material I am brought up short. How often have I pretended to know something that I don’t, to save face? How often have ugly words escaped unbidden?How often have I shaved a little truth from an excuse,  such as “Sorry, I’m late. Traffic was bad,” when in reality I had tried to cram too much into too little time and was just rudely late?

How often do I exaggerate?  For example, I often say, “I’m starving!” I have never been in danger of starvation, but many people have been and many more still are. When I exaggerate, I diminish the impact of the word starvation. How often have I kept still in the face of mean gossip or just plain misinformation?