Where are You? (Revisited)

Posted on August 2, 2014 by livingasapprentices

Note:  Recently I was poking around in the archives of this blog and noticed the following blog, published on January 21, 2013.  I’m re-posting it now because this blog has many new readers who might not have seen it.

My husband Fred had been ill for several weeks.  By the time he was finally hospitalized, a lung infection had spread to his kidneys and to his brain.  After about two hours in the emergency room, he became non-responsive.  We talked to him,  called his name, asked him questions, but he didn’t answer.  His eyes followed us at some points, but there were no words, no responses when he was asked to move his arm or turn over.  He was there, but he wasn’t there.

Early in the morning a day later, I walked into his room and stood near him, calling his name. Finally he opened his eyes.  A minute later they came alive and then filled with tears. “Thank you!  Thank you! Thank you!” he repeated as the tears rolled down his face.

“Why?” I asked.  “I didn’t do anything.”  Then, thinking he meant that he was grateful to be feeling better, I said, “The doctors and the nurses were the ones who helped you.”

He shook his head, “No, I mean thank you for being you.  I’ve been in a very dark place. You are the first person I recognize!”  And then the

questions came. “Where am I? Why am I here? Why are they doing all this stuff to me?” After about an hour, as more clarity came, he sheepishly said,  “I didn’t know anybody so I asked for a phone, but I didn’t know anyone to call.” We both laughed and he went on. “The only way I figured out who I am was by seeing you.  Thanks again for coming!”

A few days later I heard a sermon on Genesis 3 and  listened again to God’s poignant call to Adam,  “Where are you?”  When Fred was non-responsive, we were all calling him, essentially asking him, “Fred, where are you?”   It occurred to me that my sense of loss when the Fred I knew and loved was “missing” must be something similar to God’s reaction when  Adam was hiding from him.  Where was this creature he knew and loved? 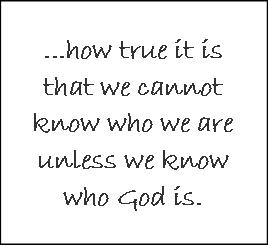 During the last few days, I have thought a lot about this parable of the lost Fred. I thought about how often we go “missing” from God, so far gone

that we don’t  hear his repeated calls.   I thought about how far on “the dark side”  we travel as we walk farther and farther from God’s voice.  I was jolted by the fact that we, like Fred, concoct useless plans to try to fill in what’s missing when God’s missing.  And how true it is that we cannot know who we are unless we know who God is.   And how grateful  we  are when we finally hear God’s voice and realize who he is!