The Day After Christmas – Part 2

Posted on December 27, 2014 by livingasapprentices

At 6:10 AM on the day after Christmas, I stumbled and bumbled into my son’s car and we headed to the hospital. I was to check in at 6:30 for a scheduled minor, but important, procedure an hour later. For several days I had been nervous about the procedure and the results it might reveal. But in the days leading to Christmas, I was more concerned with the fact that my right leg, already swollen because of circulatory problems from diabetes, was now huge, hard, multi-shades of red, and streaked like close-by lightning. And scream-out-loud painful.

As I walked into the prep room and the nurse started giving directions, I told her I thought she needed to look at my leg first. When I showed her, she gasped.  “I’ll be right back,” she said, “I have to get the doctor.” As we  waited for

the doctor, the time for the surgery  got closer and closer.  I had been happy to be scheduled as the first surgery, so I wouldn’t have to wait for anyone else. I pictured how angry those who followed my appointment would be if everyone got pushed back.  That thought began a dialogue with the Holy Spirit that didn’t end until I was safely in my house many hours later. God spoke: “Perhaps you won’t be as judgmental next time you have to wait.”

However, I still told the nurse repeatedly that I didn’t want to mess up their operating schedule.”  She said, “DVT (Deep Vein Thrombosis) is life-threatening and your health is more important than our schedule!”  God spoke: “You are my child; I will always take care of you.“

Eventually the surgery was canceled. I was wheeled through many halls and in and out of elevators to the emergency room to wait for testing for a blood clot. I was ushered into an out-of-the-way room and left to my own devices. As I lay there on a very uncomfortable bed, I felt totally alone. There was no noise in the hall. No one had said what came next.  I looked straight up at the ceiling for a long time, feeling totally helpless and forgotten.  God spoke:  “This is what powerlessness feels like. I want you to surrender to this feeling, so I can help you.”  I nodded.

After several minutes, I tried to call my friend to tell her not to come to pick me up at our scheduled time.  There was no cell-phone coverage. I also wanted to call my husband Fred, too. He was home alone, unable to drive, and relying on me for a lot. God spoke, “Remember what you teach in your 12-step classes? Everyone has his or her own Higher Power.  Let Fred depend on his today.”

About 20 minutes later, the nurse came in and began doing what nurses do. I was still worried about contacting my friend. God spoke, “Ask for what you need.” I asked the nurse if she could make a phone call  for me and she dialed a wall phone and handed me the receiver. I called Dee and she said she was already on her way. “You don’t have to come now!” I said.  She answered, “I want to be with you.  I am coming.”

She hung up and there I was holding receiver that shouted repeatedly “Please hang up!” Finally I saw a custodian mopping the hall and called her. She came in with a curious look. “Can you help me?” I asked in a childish voice. 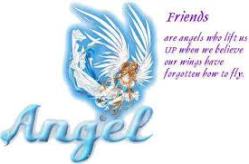 “Of course,” she said with a slight Jamaican accent. She smiled as I asked her to put the receiver back on the phone. We had a two-sentence conversation and she left.  God spoke: “I have my angels everywhere.  Just trust me.”

Dee came and the next several hours were filled with her advocacy for me.  I was uncomfortable, thinking I should be able to take care of myself.  God spoke:  “That is a deep-seated false narrative. Let it go! Be gracious and let her take care of you.”  I remembered the dozens of times I had acted as an advocate in the hospital for Fred.  I had to chuckle; giving was a lot easier than receiving. I certainly needed practice at receiving.

I was brought to another floor for an ultra-sound to see if I had a blood clot.  I have had several ultra sounds before, and I wasn’t worried.  But this one was different.  The nurse was lovely, but she probed and pushed and pulled her instrument across all the painful areas in my leg for more than 30 minutes.  I tried to relax.  God spoke:  “You know you learn more from pain than good times, don’t you?”  I said, “Okay.”  He said, “You live in my unshakable kingdom, remember? No matter where you are you are safe.  You teach it constantly.  Now just rest.”  I did and soon it was over.

Back in the room, Dee again flew into action.  I had apple juice, a warm blanket, my bed adjusted – and kind hands and eyes and good conversation holding me together.  God spoke, “This is what the kingdom is like.  We serve each other.”

Eventually, the doctor came in and told me I did have a blood clot and he was waiting to hear from my doctor about what to do about it.  About 20 minutes later he returned and laid out a treatment plan which included a blood-thinning medication.  I was so grateful! I said, “Thank you!!”  God spoke:  “You are welcome!”

When we left the hospital, I asked Dee to take me to the pharmacy near my home. We were almost there when I realized I didn’t have any money with me.  She said, “We’ll just put it on my credit card and you can pay me back.” As I stood in line to drop off my prescription, it occurred to me to ask  how much this prescription would be.  The young girl typed forever and began looking worried. I said, “It’s not covered, is it?”

“$506 for 21-days.”  I felt like dropping to the floor in a heap.  That was nearly half of my social security check for a month.

I said, “I don’t have any choice.”  When I finally got it, the cost was $456.  I asked the girl at this register how this could be since the medication wasn’t covered by insurance.  She didn’t know.  I moved away from the counter. I

t didn’t matter. God had already spoken to me while we were waiting for the prescription: “Seek first my kingdom, and all these things will be added to you.” My mind had immediately flooded with incidents of God providing in unusual ways for me and mine. This whole day had been one more example of God’s practical ways of dealing with my concerns.

We left the pharmacy and drove toward my house.  I began thinking of the delights of a hot shower!

This entry was posted in My journey and tagged blood clot, Higher Power, Holy Spirit, Seek the Kingdom of God, spiritual formation. Bookmark the permalink.

10 Responses to The Day After Christmas – Part 2