Posted on July 16, 2017 by livingasapprentices

In Eat this Book, Eugene

Peterson teaches us to chew on a passage of scripture, digest it, and put it to use in practical ways. Our Christian fathers and mothers called this process Lectio Divina. In this passage, we are reminded that God sees to everything in our lives.

After all this, God tested Abraham. God said, “Abraham!” “Yes?” answered Abraham. “I’m listening.” He said, “Take your dear son Isaac whom you love and go to the land of Moriah. Sacrifice him there as a burnt offering on one of the mountains that I’ll point out to you.”

Abraham got up early in the morning and saddled his donkey. He took two of his young servants and his son Isaac. . . . On the third day he looked up and saw the place in the distance. Abraham told his two young servants, “Stay here with the donkey. The boy and I are going over there to worship; then we’ll come back to you. . . .

They arrived at the place to which God had directed him. Abraham built an altar. He laid out the wood. Then he tied up Isaac and laid him on the wood. Abraham reached out and took the knife to kill his son. Just then an angel of God called to him out of Heaven, “Abraham! Abraham!” “Yes, I’m listening.”   “Don’t lay a hand on that boy! Don’t touch him! Now I know how fearlessly you fear God; you didn’t hesitate to place your son, your dear son, on the altar for me.”  Abraham looked up. He saw a ram caught by its horns in the thicket. Abraham took the ram and sacrificed it as a burnt offering instead of his son.  Abraham named that place God-Yireh (God-Sees-to-It). That’s where we get the saying, “On the mountain of God, he sees to it.”

This passage depicts a dramatic event in the history of Abraham and his family.  It is full of “calls and responses,” giving directions given, directions obeyed, questions asked, answers given. The actors in the drama are God, Abraham 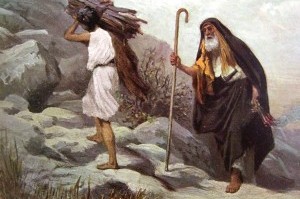 , Isaac,  two servants  (and a ram caught in the thicket).  Each of these actors has a role to play in the lesson that God wants to teach Abraham. It appears that Abraham follows the direction to sacrifice Isaac without question – although we don’t know what argument may be going on in his heart. When they reach their destination, Abraham tells his young servants to stay put while he and Isaac go worship; they obey. Isaac, too, obediently undertakes this journey with his father, although he does question the concept of a sacrifice without a sheep.

The story has been set for the audience. Now comes the conflict.  Abraham builds an altar, lays out the wood, ties up his son and, puts him on the altar.  Now the audience, you and me, responds. “What are you doing? Are you really going to kill your son?  Are you following the traditions of the religions around you?  God can’t mean for you to sacrifice a child in worship!”

But Abraham raises his knife and prepares to kill his son.  “No!” we shout. And then God intervenes.  “Stop! I see that you are obedient to me, even to the point of sacrificing what you love best to me.”   And then finally Abraham sums up what he has learned from the whole process: “God sees to it.”

Perhaps this a pattern of obedience all Christ-followers can learn from:

♥  Look back in your life.  Can you find an Abraham and Isaac story?  Who were the actors? What was the conflict? How did you resolve it? Looking back, can you understand that God saw to everything during that journey?

♥  Abraham was able to hear God because he was used to listening for and to God. Listening means being quiet and perhaps in solitude.  Carve out spots in the day for doing nothing but sitting still. As Richard Foster says, we need to resign as “CEO of the universe” and trust that God can handle things without us.  Then we can listen to what he how he is using us in his plans.

♥  Try to incorporate the 10 steps in the pattern above in to your daily life.  You may be in different stages in a variety of actions God has called you to. You may find you need way more time for listening and mulling things over in your life than you thought.

“Genesis 22 after all is a story of life coming into a situation of death; a story of redemption; a story of faith in the midst of extreme trauma. It is true that it sometimes is difficult to see God’s provision and goodness in desperate situations when tragedy strikes. Nevertheless, the text calls upon us to look up and see God’s goodness breaking into situations of despair.  The true act of faith on the part of Abraham thus is not the blind faith that often has been the dominant message emerging from this text, but rather the ability to recognize God’s provision in the ordinary, especially in those circumstances when everything appears to be futile” (Juliana Claassens in Working Preacher website, June 26, 2011).

This entry was posted in Going Deeper with God and tagged Abraham, faith, Genesis 22, Isaac, Listening to God, obeying God, Working Preacher website. Bookmark the permalink.
%d bloggers like this: