The Wonder of Solitude

Posted on March 14, 2018 by livingasapprentices 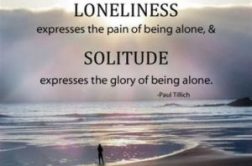 line in sports is the concentrated effort to master the body so that it can obey the mind better. Discipline in the spiritual life is the concen- trated effort to create the space and time where God can become our master and where we can respond freely to God’s guidance. Thus, discipline is the creation of boundaries that keep time and space open for God. Solitude requires discipline, worship requires discipline, caring for others requires discipline. They all ask us to set apart a time and a place where God’s gracious presence can be acknowledged and responded to” (By Henri Nouwen published by the Henri Nouwen Society).

According to Psychology Today, solitude is “a state of being alone without being lonely.” According to Henri Nouwen, solitude requires boundaries that keep time and space open for God. Solitude means creating a space where “God’s gracious presence can be acknowledged.” Solitude and silence are often linked together, perhaps because we imagine that solitude means being quiet. Silence often requires solitude, but solitude doesn’t require silence – sometimes melodic background music or rippling water can set the stage for aloneness without being lonely. However we parse the concept of solitude, I think we can all agree that solitude is a lost art.

We all know the major reason why solitude – being alone – is rare. We seem to feel a constant need for connection with people in this era. If being with people physically isn’t possible, ubiquitous phones beckon us with calls, apps like Facebook, texts, instagrams, and  e-mails. Constant contact is the dream for many of us, even though it often turns into our worst nightmare. And we still resist the discipline and wonder of being solitary!

I think that the practice of and comfort in solitude is necessary for living in harmony. As someone who glories in solitude, I often wonder why people fear it.  Personalities differ, I know; some people are anxious when they aren’t around people. But perhaps it’s more than that. Do we not understand the value of being alone with our thoughts? Would we rather be distracted from those thoughts than face them?  Does it seem like more fun to be social than to be alone? Do we mistake solitude for loneliness? Is is too hard to set the boundaries that Nouwen recommends because we don’t want to hurt the feelings of other people? Are we so attuned to the importance of  helping others that being alone seems selfish? Do we scoff at the thought that God might want to commune with us? Do we undervalue the concept that when we are in harmony with ourselves – a reward of solitude –  harmony with others flows more easily?

I often try to picture the scenes described in the Gospels. One of my favorite scenes is Jesus alone on a hillside filled with wildflowers or gently waving grass. His body is relaxed; his face is serene. He is breathing deeply and slowly, taking in the beauty around him. He has just escaped the admiring crowds. When he leaves the hillside, he will again face his questioning disciples. The mantle of his enormous responsibility will be easier to bear because of his time alone, and the wisdom he shares will be deeper because of his reflections in this quiet space. If Jesus needed solitude, why do we so easily shrug it off?

Solitude is an acquired pleasure. And as Jonathan Bailey says, “If it [solitude] doesn’t make it into our schedules it will never move into our souls.” In 2018, creating time for solitude seems to be even more necessary than ever.

1 Response to The Wonder of Solitude