The Loss of Innocence

Posted on December 18, 2012 by livingasapprentices

As I struggle to put words to my thoughts about yet another tragedy – this one taking the lives of so many children in the kingdom – I offer these thoughts by Mark Galli, editor of Christianity Today.  Hopefully, it will help us all hang on to our narratives of a good and beautiful God who mourns as we do and propel us into whatever action God calls us to:

We stand aghast at the loss of innocence. Twenty children ages 6 and 7 have died today, at the hands of a man mad with rage, who may not have known what he was doing. There is something especially galling about the innocent being killed. Like the 1940s French Jewish children, boxed up in train cars and shipped off to Auschwitz at the hands of another man filled with rage. It is a mystery why God allows the innocent to suffer. But he does.

Like the one whose innocence was like no other’s. One innocent and holy and precious to the Father, so special it is said that they were one, like no other father and son are one. One in essence, theologians tell us. You would have thought that the Power and the Glory would have stepped in with thunderbolts when the world conspired to kill his Innocent One. But this God did not do anything then either. And the Son did not rage at the cruel injustice and the waste of a good life at the hands of evil men. All he could seem to say was a prayer that his murderers, who he said did not know what they were doing, be forgiven.

Such an odd and strange pair, this Father and Son. The one giving up innocence into the hands of evil. The other forgiving evil men as if—well, as if love really is the ultimate reality of the universe.

Those closest to that ancient murder had no idea what God was up to. But we now note that as he breathed his last and said, “It is finished,” he began his descent into the darkest place in the universe, where thieves and liars, rapists and murderers—even of children—wail and gnash their teeth. And in that place of unimaginable horror, he proclaimed release to the captives. We don’t know exactly what happened there, but other biblical verses make me think that to as many as did receive him, he gave the right to be called the children of God (John 1:12).

And the Innocent One wasn’t done—far from it. He looked at mad humanity and bloody death and said, Enough is enough. Three days after the world 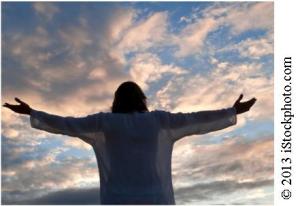 had done its dirtiest work on the most innocent of all, he rolled back the stone and emerged from the grave (smiling, I like to think), as if to say that the death of the innocent is not the last word. Not even close.