Posted on May 10, 2016 by livingasapprentices

“Around the world today we see the rise of leaders who offer various forms of authority without vulnerability – strength without risk. This is the promise of every authoritarian government and every dictator, and it is increasingly the currency of American political campaigns. . . .

Christians, of all people, should be able to resist the temptation to cheer at shallow policy proposals, and for politicians who are shallower still. We must recover the politically radical dimensions of the claim the ‘Jesus is Lord.” To say Jesus is Lord is to establish a standard against which all  human exercises in power can be judged – and in time, will be judged.

Jesus never flaunted his power. His public miracles were often followed by deliberate withdrawals from sight – as when the crowds, amazed by the miraculous provision of food , sought to make him king. He chose a title ‘Son of Man’ that for all its messianic overtones identified him with simple humanity, not godlike invulnerability. He knew that a fatal confrontation was inevitable, but he never stirred up a grievance or indulged in self-pity” (Andy Crouch in Christianity Today, May, 2016).

“You are someone only in as far as you are love, and only what has turned to love in your life will be preserved. What love is you can learn from Jesus…. So be converted to love every day. Change all your energies, all your potential, into selfless gifts for the other person. Then you yourself will be changed from within and through you God’s kingdom will break into the world” (H. van der Looy in Rule for a New Brother).

“In 2 Corinthians 12, Paul describes not the Enemy’s but the Lord’s purpose in allowing hardships to surround kingdom service. Paul discovers that the Lord is allowing his troubles in order “to keep me from becoming conceited: (v. 7). 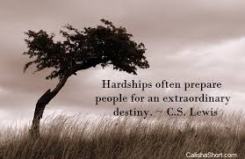 While Paul’s mysterious “thorn” may be the Enemy’s work (he calls it a “messenger of Satan”), God has re-purposed it. He is using it for his ends, namely to rescue Paul from arrogance . . . .

But Paul’s hardship has a double purpose.  Not only is God using it to work in Paul, he is using it to work through Paul. Jesus tells him: “My grace is sufficient for you, for my power is made perfect in weakness” (v.9).  Paul’s difficulty paves the way for God’s power to be at work, perfectly, through his life.

So our personal troubles can accomplish two things. Trouble thwarts our conceit, and trouble lets God show off his strength. In both ways, it disabuses us of the notion that serving God is all about us” (Sarah Lebhar Hall in Christianity Today, May, 2016).

“Getting people to come is important  because you can’t have community without people, but getting people to come is not the end goal. We wanted to create a community that invites people to come experience being deeply known and loved, and an experience so compelling that they become eager to go—to go free the prisoner, feed the hungry, comfort the grieving, love the addicted and mentally anguished, house the homeless and ‘stand in and close the gap’ between those who have what they need to fulfill their God-given potential and those who do not” (K. Killian Noe in Descent Into Love: How Recovery Cafe Came to Be).

This entry was posted in Quotes and tagged authority without vulnerability, C.S. Lewis, community, hardship, Jesus. Bookmark the permalink.
%d bloggers like this: